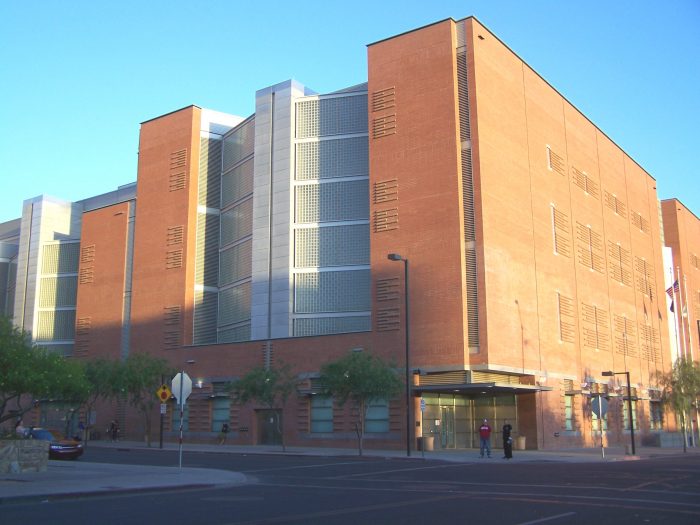 The street address and the mailing address is the same for all of the prisons.  However, before mailing anything to an inmate in the Maricopa County Jail, you should review the jail’s policies. Not only are inmates restricted to only receiving postcards, but the postcards have to comply with very stringent rules.  They must be between 3.25 inches x 4.25 inches to 4.25 inches x 6 inches.  The only stamps on them must be USPS stamps or metered.  All stamps are removed before the postcards are given to the inmates.  The only ink that can be used on the postcards is blue or black ink.

Email: Inmates cannot receive emails, but you can email the Maricopa County Sheriff’s Office through the link at their official website.

Security Level: Pretrial confinement; all security levels with offenders who have not been classified.   Post-conviction confinement is for inmates who have been convicted misdemeanor or low-level felony offenses and have received a sentence of up to one year in jail.

Distinguishing Feature:  Maricopa County Jail is known throughout the nation as the home of the Tent City Jail.  The Tent City Jail was begun in 1993 and was Sheriff Arpaio’s effort to balance the problem of overcrowding with his desire not to release inmates before the end of their sentences.

Employees:  The Maricopa County Sheriff’s Office has over 3,400 employees, but those employees include other law enforcement officers and civilian employees in addition to corrections officers.

Overview:  The Maricopa County Jail is, by design, one of the most difficult correctional facilities in the United States.  Inmates live under very rigorous conditions, by intention.  However, while the living conditions are difficult and harsh, the jail seems to be free of some of the problems that plague many other jails.

Inmate Population:  The population at the Maricopa County Jail includes all adult pretrial detainees in the MCSO system, which means that it has offenders of all levels.  These offenders may not have been classified because of their pre-trial status.  However, the jail has facilities for high-level, high-dangerous offenders, separating them from the other inmates.  In addition, the Maricopa County Jail also has a veterans-only housing unit.

Living Conditions: Living conditions in Maricopa County Jail are notoriously difficult.  While they vary from jail to jail, some of these harsh conditions include: the tent city jail, where inmates literally live in tents; the use of male, female, and juvenile inmates in chain gangs; feeding inmates only twice a day with meals costing between $.15 and $.40 and with no salt or pepper available; and the pink underwear that inmates wear.

Production: Maricopa County Jail is not associated with any production, but inmates are not only responsible for providing services for the jail facilities, but also work on chain gangs.  These chain gangs provide labor for the community.

Famous Inmates: A number of former Maricopa County Jail inmates became famous because of problems that they encountered while at the jail, including: Scott Norberg, Richard Post, and Brian Crenshaw.

Find an Inmate: The Maricopa County Sheriff’s Office inmate locator tool allows you to search for an inmate by first or last name, booking number, or date of birth.

Send Money to an Inmate:  You may deposit money into an inmate trust account in a number of ways, including machines located in the lobbies of some of the jail facilities, online, by phone, and through third-party providers.