Home/ Article/ How to Conduct a Federal Prison Inmate Search

How to Conduct a Federal Prison Inmate Search 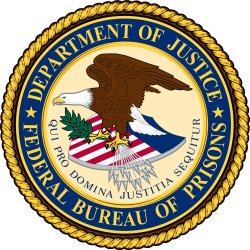 Finding an inmate in the federal system can be daunting, because federal inmates can be moved to meet changing facility demands, and, because of security concerns, these moves are not shared with inmates or their families ahead of time.  In this article, we give you tips on how to conduct a federal institution inmate search.  These searches can: help family members and loved ones keep track of incarcerated loved ones; run a federal prison cellmate search; and even victims keep tabs on the location of perpetrators.

Once a defendant is convicted in the federal system, the Bureau of Prisons has the sole responsibility of determining where an offender will serve his sentence.  They do so based on the factors outlined in the Security and Custody Classification Manual.  These factors include: security level, supervision level, medical classification care level, an inmate’s programming needs, and administrative factors.  Taking all of those things into consideration, the Bureau of Prisons will attempt to place inmates within a 500-mile radius of their release residence, but this is not always possible.  Generally, when inmates are placed further than 500 miles from their release facility, it is due to programming, security, or population concerns.  Therefore, where an offender was arrested is not predictive of where a defendant will be incarcerated.

Prison programming can be a very important part of prison.  Currently, federal prisoner recidivism rates are significantly lower than the recidivism rates in many states, due, in part, to federal prison programs.  Some programs target certain types of offenders, while others are intended to reduce idleness and prevent all offenders from offending while incarcerated.  For example, inmates incarcerated in the federal system have the ability to work to earn money.  While not all federal prisons offer the same job possibilities, they do adhere to a standard pay scale, which you can view to see federal prison inmate wages.

The Bureau of Prisons has 122 institutions, 6 regional offices, a headquarters, 2 staff training centers, 25 residential reentry management offices, and 12 contracted private correctional institutions throughout the United States. The BOP locations are broken down in two large ways: by region and by type of facility.  You can also breakdown the facilities by region, state, facility type, security level, and prison type.   Once you locate an institution, either through the BOP location tool or through an individual prisoner’s record, you can click on that location.  Doing so will reveal images of federal prisons and basic information about that location.

When a loved one is facing a conviction, many people like to research prisons within a 500-mile radius of the release address in order to determine where an inmate is likely to be incarcerated.  The easiest way to do this is by looking at prisons by state in the federal prison directory.

There is no federal prison in Maine.

The Virginia federal prisons list includes: Lee USP and  Petersburg FCC.  However, a federal prison in Virginia inmate search might want to include states that are frequently lumped together with Virginia as part of the D.C. metro area, including Maryland and D.C., itself. 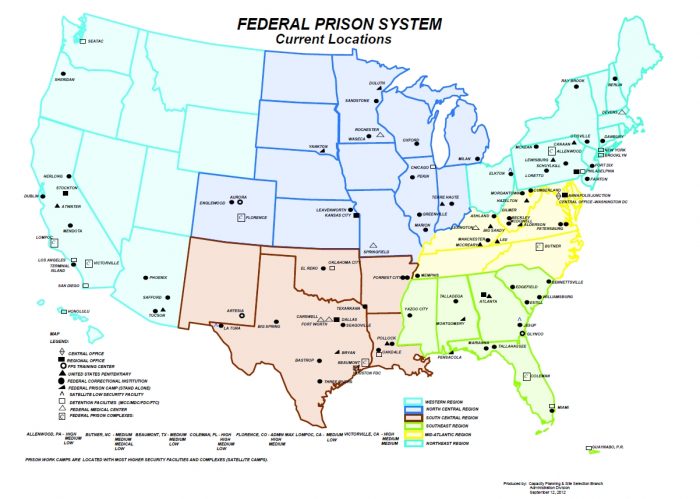 As the above list makes clear, not all geographic regions are represented evenly, and the disproportionate distribution of federal prison facilities is not simply the result of disproportionate geographic distribution of the population.  In fact, federal prisons are often located in sparsely populated areas, where land is cheap.  They are also frequently located near bustling urban population centers, so that they can hold inmates who are awaiting trial.  This can make looking for prisons challenging.  For example, a person searching for federal prisons near Utah would not want confine themselves only to the state, but look throughout the Western region.  However, a person searching for Southern California federal prisons would want to confine a search to only part of a state, rather than expand it beyond the state, and might want to use the BOP’s regional map tool.  This is also helpful when trying to narrow down the name of a particular location, such as the name of the federal prison in Richmond, VA.

Sometimes, you may be able to predict they type of facility where an inmate will be incarcerated.  In those instances, you would want to run a federal prison camp inmate search or other facility-type specific search.  Just as if you are searching for a specific geographic location, the tracker tool does not let you limit the search to only those institutions, but the results do display the type of institution.

We hope after reading this article you can now conduct a quick and successful federal prison inmate search.